Momentum 360 has developed a solution to make ADA compliant virtual tours. ADA (The Americans with Disabilities Act) compliance means making your service or product accessible to people with disabilities and it was amended to include websites in 2008. Hotels are increasingly aware that non-compliant websites make them potentially liable for lawsuits and fines, and many have implemented standards to comply.

Up until now, there was not a streamlined solution to make virtual tours compliant. Momentum 360 has created a solution. Introducing an embedded player which not only provides AA compliant virtual tours, but also can be used for older virtual tours you already have in your catalog. Also, as an added bonus your search engine optimization will be amplified. If you would like to take a deep dive on ADA Compliancy check out this video series on ADA compliant virtual tours. 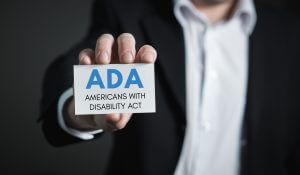 See a list of past and current lawsuits on the ADA website that includes many hotels and resorts.

Momentum 360 Has an Exclusive Player that Adheres to Accessibility Guidelines

All of the above is delivered in a custom-built embedded player that hosts both media items. Firstly, it includes the standard virtual tour and secondly the alternative accessible version that is ADA compliant.