Hey there! Thank you for joining me again for another insane virtual tour! On today’s virtual tour we are going to visit one of the seven wonders of the world, the Great Pyramid of Giza. There is so much conspiracy on how this pyramid was built and that is because of its insane size and time period it was erected. It has been said that this pyramid is perhaps the most colossal single building ever erected on the planet.

The Great Pyramid of Giza stands at 481 feet tall and is 755 feet long on each side. It is made up on limestone and granite blocks that when you see you think, how the hell did people move these without machine power? 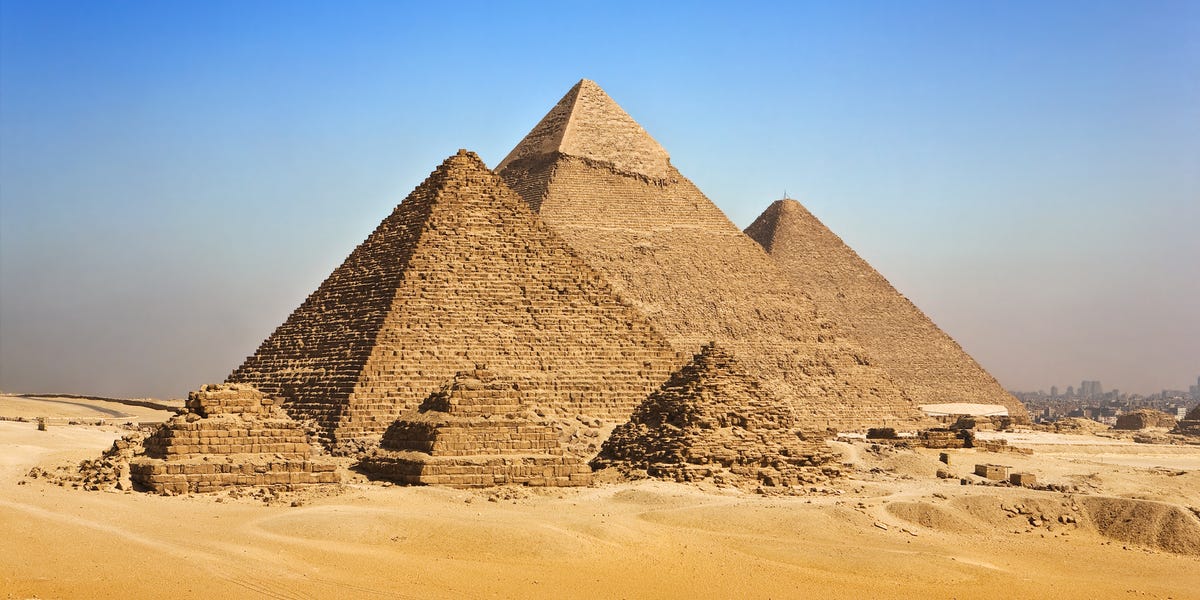 The Great Pyramid of Giza sits in a dry desert bed in Giza which is to the west of the Nile River. Right across the river is the city of Cairo. These places are bustling cities now but imagine back in the day when the only things here were these humongous pyramids.

Approximately 2.3 million blocks of stone were cut, transported, and assembled to create this 6.5-million-ton structure, which is a masterpiece of technical skill and engineering ability. The biggest feat to me being that they had no technical resources and no machine powered equipment to help them. The Great Pyramid of Giza was built my brute force and strategy.

As you can see the outside of the Great Pyramid has deteriorated a lot. It used to be covered in a white shiny limestone that would sparkle when the sunlight hit it. You can see the last of this limestone at the very top of the pyramid giving it a little shiny cap.

This virtual tour of the Great Pyramid will start at the main entrance, which is on the north side, about 60 feet above ground level. Once inside, you will find an original descending corridor that will come to a fork where you can either go straight, up, or down.

Meet me in there I can not wait to show you aGreat Pyramid of Giza Virtual Tour!

As we enter the Great Pyramid of Khufu, we go down a shallow ramp and come to a crossroads. We can either continue going down, to the Subterranean Chamber, or we can go up on an ascending passageway up towards the Queen’s Chamber, Grand Gallery, and eventually to the King’s Chamber.

Let us go up the ascending passageway right now. As we reach the top of this passageway we come to a grand opening. This is the Grand Gallery. 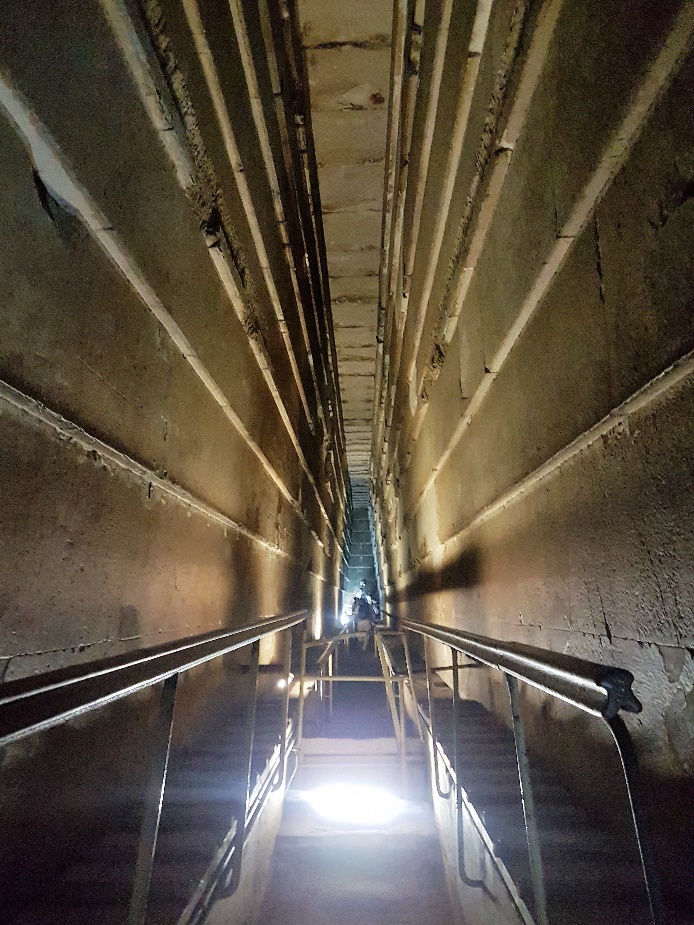 When explorers first discovered the Grand Gallery, they stepped right where you are standing today, into a steeply slanted passage less than 7 feet wide but more than 153 feet long and 29 feet high! As you can see the walls are lined with massive granite blocks that came from the Aswan quarry. The Grand Gallery is completely empty, no artwork on the walls, no murals, no carvings, and no artifacts at all. It is just the most breathtaking space because of its massive size and structure.

Archaeologists and other scientists have tried to figure out what the use of the Grand Gallery in the Great Pyramid of Giza was for, but that is tough to figure out without any fellow Egyptians to ask. One theory is that the Grand Gallery served as an observation point for astronomers to use to map out the stars and constellations. This would only have been while the Great Pyramid was under construction and the roof was not complete yet. Historians came up with this theory because they Great Pyramid is directly aligned with the constellations.

Next stop on the Great Pyramid of Giza Virtual Tour is the King’s Chamber. Head up the steep staircase and I will meet you there!

Don’t forget to check out our other virtual tour adventures here!

Watch your head as you step into the King’s Chamber. This low entrance opens up into a large, gorgeous room. This room is entirely lined and roofed in granite. It is the only room in the Great Pyramid where granite is used instead of limestone. That tells us that whoever was buried in here had to be a King. 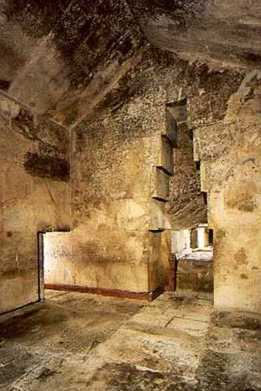 Right now, we are directly in the middle of the Great Pyramid. If you want to get freaked out just think about how much wait in rock is on top of us right now. I hope you are not claustrophobic! The King’s Chamber in the Great Pyramid measures 10.45 meters by 5.20 meters and is 5.80 meters tall.

Above the King’s Chamber are five compartments separated by massive horizontal granite slabs. No one knows the exact purpose of these granite slabs up there, but it has been assumed by scientists that the slabs were intended to shield the ceiling of the burial chamber by diverting the weight of the pyramid above it. It would explain how there could be a hollow room under all the force of the rock on top of it.

This being the room where the King was buried, it can be assumed that it used to be filled with extravagant items and gold. It is now bare after hundreds of years of robbers and looters. The mummified King even got removed from his own tomb! I don’t know about you but after all the movies I have seen, there is no way I am going anywhere near a mummy! All that is left is the sarcophagus where the King was laid to rest. If you are wondering what a sarcophagus is (like I was), it is pretty much an Egyptian coffin.

The sarcophagus is huge, it is estimated to be 3.75 tons. Compared to other features in the Great Pyramid of Giza, this tomb is not well finished. There are clear saw marks on the outside, and it appears they cut too deep on multiple occasions. The top of the sarcophagus is also missing which probably went away with the King’s mummy.

Also in the King’s Chamber are two air shafts that are tiny tunnels diverting upwards to the outside of the Great pyramid. It is unknown whether these are meant for air ventilation or have some other religious purpose.

Let’s head back out and down the Grand Gallery. Next stop on the Great Pyramid of Giza Virtual Tour is the Queen’s Chamber! 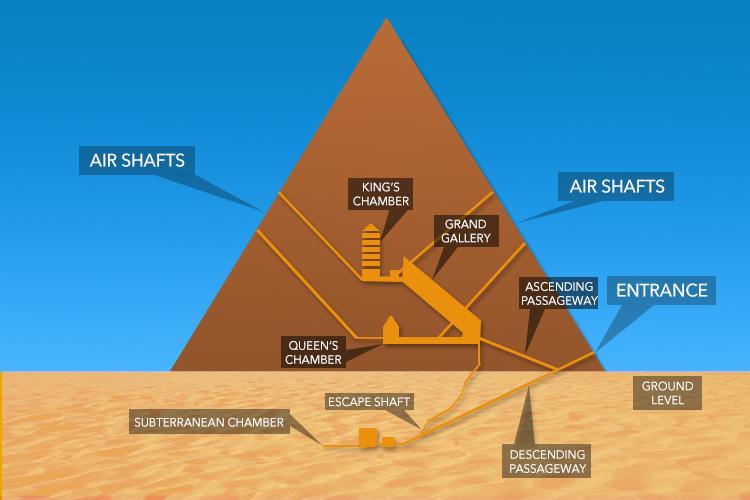 We enter the Queen’s Chamber through this horizontal passageway from the lower end of the Grand Gallery. About five meters from the end of the passage there is a step before the path descends down some more until we reach the actual floor level of the Queen’s Chamber. There is some speculation about this step, some people think that the pink granite floor blocks originally started at the edge of the step and ran to join the floor of the chamber, so there would never be a step in this case. People suggest these blocks were stolen in antiquity. Others suggest that this feature is the result of a change in building plans.

The Queen’s Chamber in the Great Pyramid of Giza is made entirely of beautifully crafted limestone rocks. It sits on the 25th level of the pyramid (think of each row of rock as one level). The walls in here are bare, again with no artwork, no murals, and no carvings except one niche in the east wall. People have speculated that this niche is all the remains of a statue that stood here of the King.

Historians have theorized that this room would have been sealed off and only used as a room for the King’s spiritual soul. The ancient Egyptians were very spiritual people, so this is the likely reason for the chamber to exist.

In 1872 an explorer found three strange objects in the Queen’s Chamber: a granite sphere, a wooden slat, and a copper hook. It has been since determined that these objects were used as tools of some sort.

That’s all for the Queen’s Chamber, head back to the entrance and we will go check out the basement of the Great Pyramid of Giza otherwise known as the Subterranean Chamber.

Check out our other blogs here!

The Subterranean Chamber of the Great Pyramid of Giza is accessed from a descending passageway starting at the entrance of the pyramid. It is a very unfinished chamber compared to the other two chambers in the pyramid. This Subterranean Chamber lies 90 feet below the surface of the ground and is under the pressure of 2.3 million blocks of stone weighing about 6.5 million tons.

Original workers have chipped away at the limestone bedrock to build what was thought to be the original burial chamber for the King. Historians believe the chamber is so unfinished because the King suddenly decided he wanted his burial chamber to be higher in the Great Pyramid to where the King’s Chamber lies today. 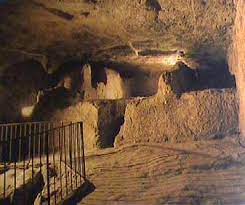 This theory is hard for me to see because the other pyramids next to the Great Pyramid both have this unfinished subterranean chamber as well. No one actually know the real reason behind this chamber, everything is only speculation.

What do you think this subterranean chamber was meant for? Leave a comment below!

Thank you so much for coming along this Great Pyramid of Giza Virtual Tour! I had a blast sharing my knowledge with you all and hoped you enjoyed your inside look at the Great Pyramid. I can not wait to see what virtual tour we are going to go on next. If you have any recommendations on where we should tour leave a comment below!

Don’t forget to leave us a comment of what you thought about this adventure and be sure to check out more adventures here! 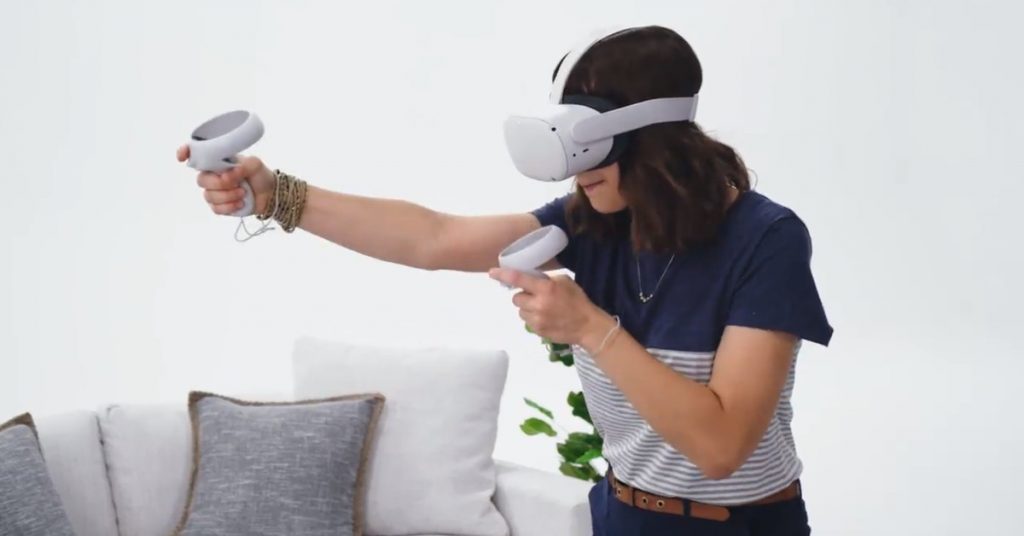 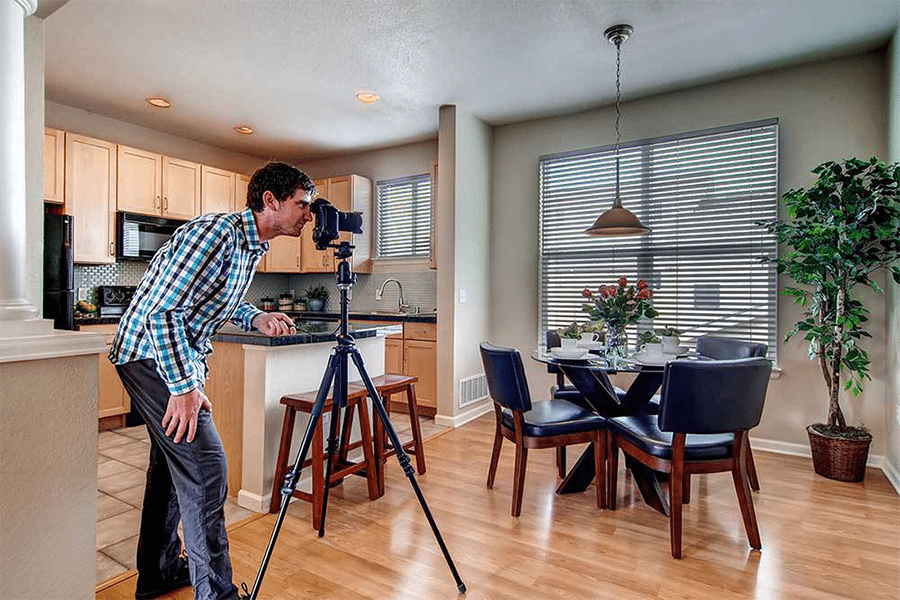 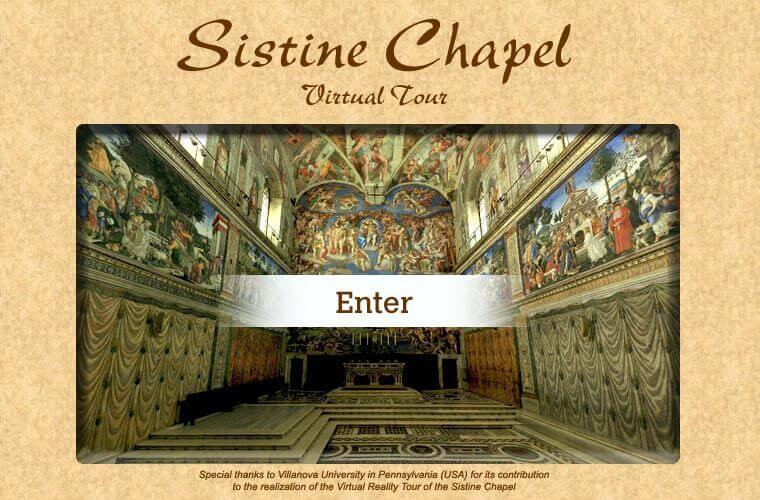 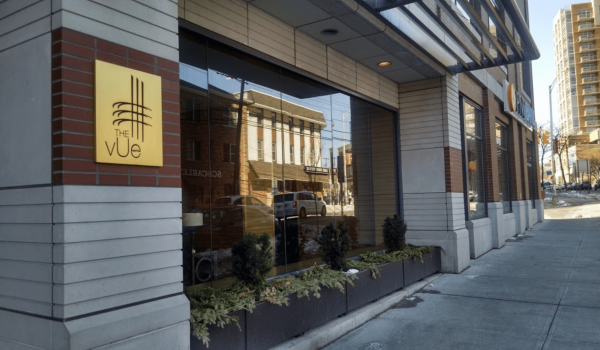