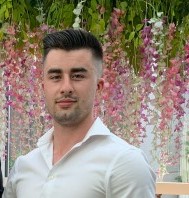 Salesman turned into a business owner. Now currently serving as the Co-Owner of Momentum Digital and Momentum 360, Sean has worked his way up from sales intern to the owner of both companies in little under 3 years.

Sean graduated from Penn State this may with a marketing degree and an unofficial minor in Spanish. From the time he was little, he knew that entrepreneurship was his calling. He just didn’t know where to start.

After finding Momentum in the summer of 2017, Sean immediately showed value to the team as a sales intern. Whilst working on various projects, he was able to accumulate over $100,000 of ticket sales for the Blockchain World Conference in Atlantic City. After the team took notice of this, they immediately began to promote him. From sales intern, to sales manager, to sales director, to now owning Momentum, Sean has worked his way up and knows the company in’s and out’s to a tee.

Sean grew up in Lafayette Hill, PA where he found a love for entrepreneurship by making lemonade stands and trading basketball cards. He started up his own podcast, “The Sean Boyle Podcast” in 2015 as well, before joining Momentum.

Sean learned how to become an entrepreneur from his Father, Bill. Bill used to own a bar and restaurant called, “The Boyler Room.” Due to complications, Sean took ownership of the bar with his brother, Ryan.

You can check out his weekly blog videos on YouTube, where he talks about the various new projects he’s working on.

Simply, I agree with Mac’s statement. We need to help small business owners that can’t help themselves in terms of digital marketing. I love this company, and I want to grow it and help as many people as I can. That’s our goal and we will continue to work towards that goal until the end!